As part of the memorial to Gary’s mom I painted an old carousel horse in her honor with symbols from her Cherokee heritage. 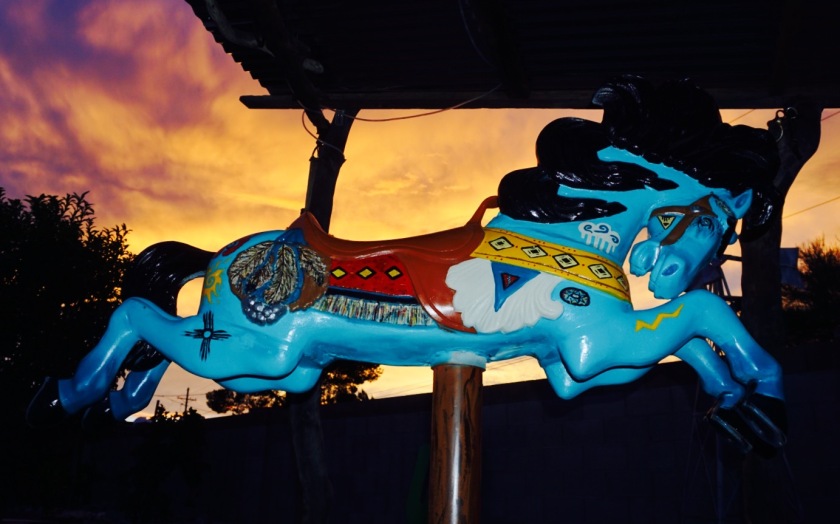 Gary’s mother Juanita , born in 1925,  was raised with her 100% Cherokee Grandmother living with the family.  Grandma Root shared a bed with her and told stories to little Juanita of nature, lore, and  her own past on the Trail of Tears.  Juanita listened to Grandma Root’s stories every night. She  believed that everything in creation contained the Creator’s spirit and must be cherished and respected.  Juanita and her mother, Dolly,   were artists.  Juanita  often painting Kachinas and other southwestern art, giving it away to all her friends or leaving her art as part of a wall or house they moved away from. The symbols on the horse represent things about her and things we shared.

The base color is turquoise.   Juanita  worked in a fine jewelry store and sold Turquoise and silver jewelry. She had great knowledge of the gemstone and enjoyed meeting all of the artists symbolized by the jewel on the horse’s right thigh.  Some of our outings were to Silversmiths and she would identify the artist, the origin of the turquoise and the value. Blue was her favorite color and above the hooves is darker ombre.

The lightening bolt is a symbol that the warriors would paint on their horses legs to give their horses speed.Once when she was staying in a cabin in Sedona, she decided to ride her scooter back to her place. Her scooter has two settings; rabbit and turtle. She turned it on rabbit and rode off so fast in the wrong direction with Gary and I running after her.  She LOVED to go fast. She loved adventure.  The Lightening bolt signifies both.

One of Juanita’s favorite pastime was to find shapes in the clouds represented on the horse by the various  cloud symbols.  I remember riding in the back seat of a car with her on the way to Tombstone. After identifying many animals/people/shapes in the clouds, she leaned over to me and said “Honey, I think that cloud looks like a…”  and proceeded to show me her middle finger.  We laughed until tears rolled down our cheeks.

G’s red right hand print on the rear is the  symbol of safe journey and the spiral in the middle means home.  Safe journey home Juanita.You are safe now lovely woman. 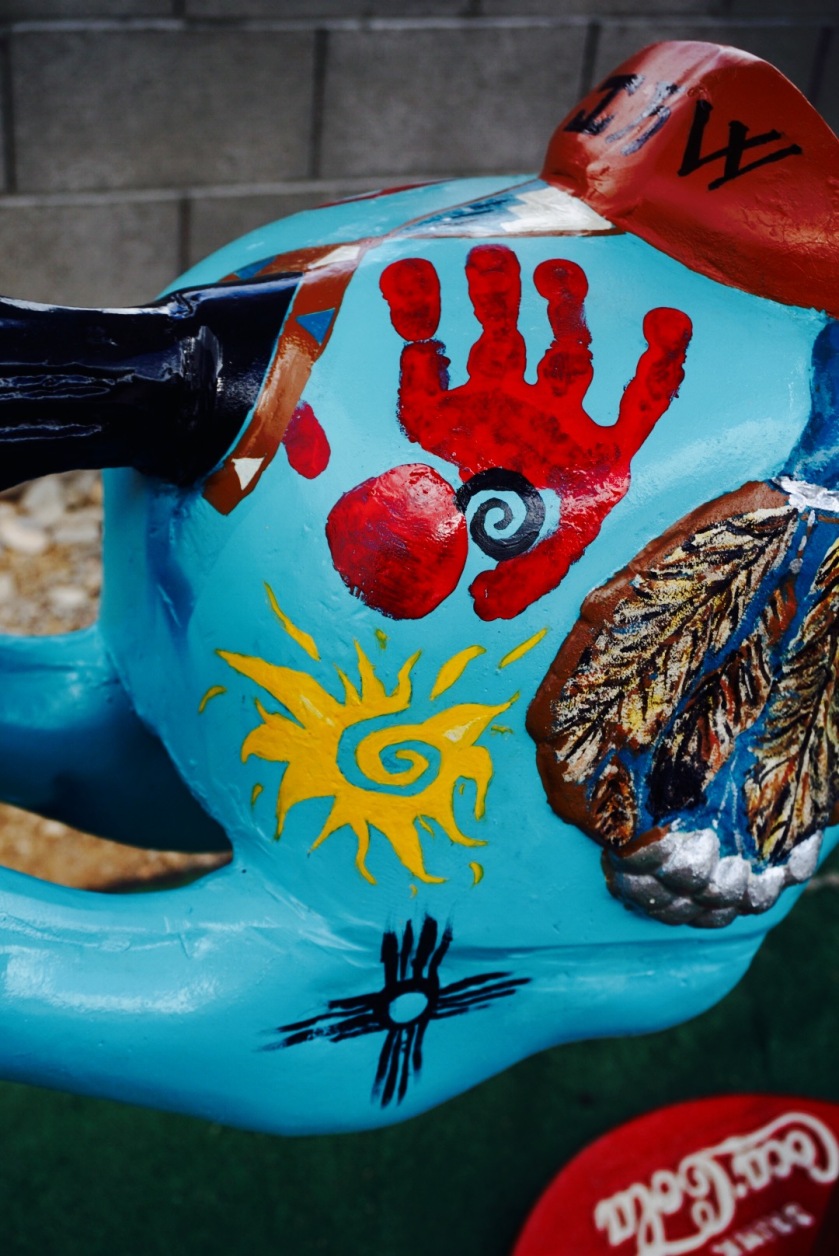 There is a sun symbol that represents the Cherokee Sun Myth which the the when sun shines on the faces of the Cherokee people they  smile.  The symbol below it in black is also a type  sun symbol but signified the four directions of the earth

There’s even a blanket to keep her warm.   The feathers are representative of her love of birds and animals.  She could sit for hours identifying birds for me.  From the time she was a little girl she made pets of wild animals wherever she lived. One time it was a skunk family with a mommy, daddy and 8 babies who followed her everywhere (much to G’s dismay as it was at his Lodge).

The back of the saddle has her name written phonetically in Cherokee alphabet.  Many people don’t know that the Cherokee had a written language and published newspapers.  Grandma Root’s childhood home was a two story house on a river which they were taken from to be relocated to the reservation.  (Actually more than once as they ran away from the reservation back home again.)  The first symbol that kind of looks like an I = Wa sound. The  lower case fancy h=Ni  (long I sound) Fancy W=Ta.  There is no long E sound in the Cherokee language so it is wanIta. Note to the English Language: Isn’t it odd  that the word phonetically is not spelled phonetically.  Shouldn’t it be foneticly.

The red symbol on the rear is the Cherokee symbol for Love. Our  love for this tiny little 4’9″-90 pound woman was immeasurable.  She had the most melodic laugh and we would do anything to hear it. I miss her voice every day.

The hand on the shoulder represents life and the crossed arrows represent friendship.  Juanita gave second chances to so many young children.  She was a foster mother to 57 foster boys over the years.(Not a typo, really was 57!)   She gave them a second chance at life and was a friend when they needed one.She was my friend too and oh how  I miss her beautiful soul. 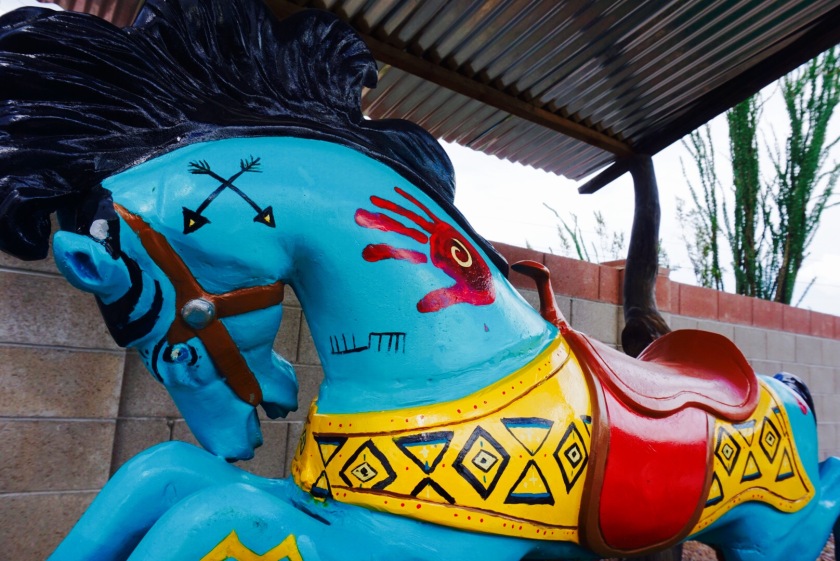 The lines below the thumb on the hand represent spring which was always her favorite time of year.  They also represent crops.  Every time we had a plant that was dying I would take it to her. She would talk to it, love it, and it would flourish.  She would call me and say “that dying lily you gave me has two blooms on it now!”  Of course it does.

“Juanita Rides The Sky” was painted with love for a beautiful spirit.  It symbolizes a tiny little woman who’s mark on this world was huge. She believed the Great Spirit/Creator was in every living thing. I hear her voice so often and feel her spirit everywhere. 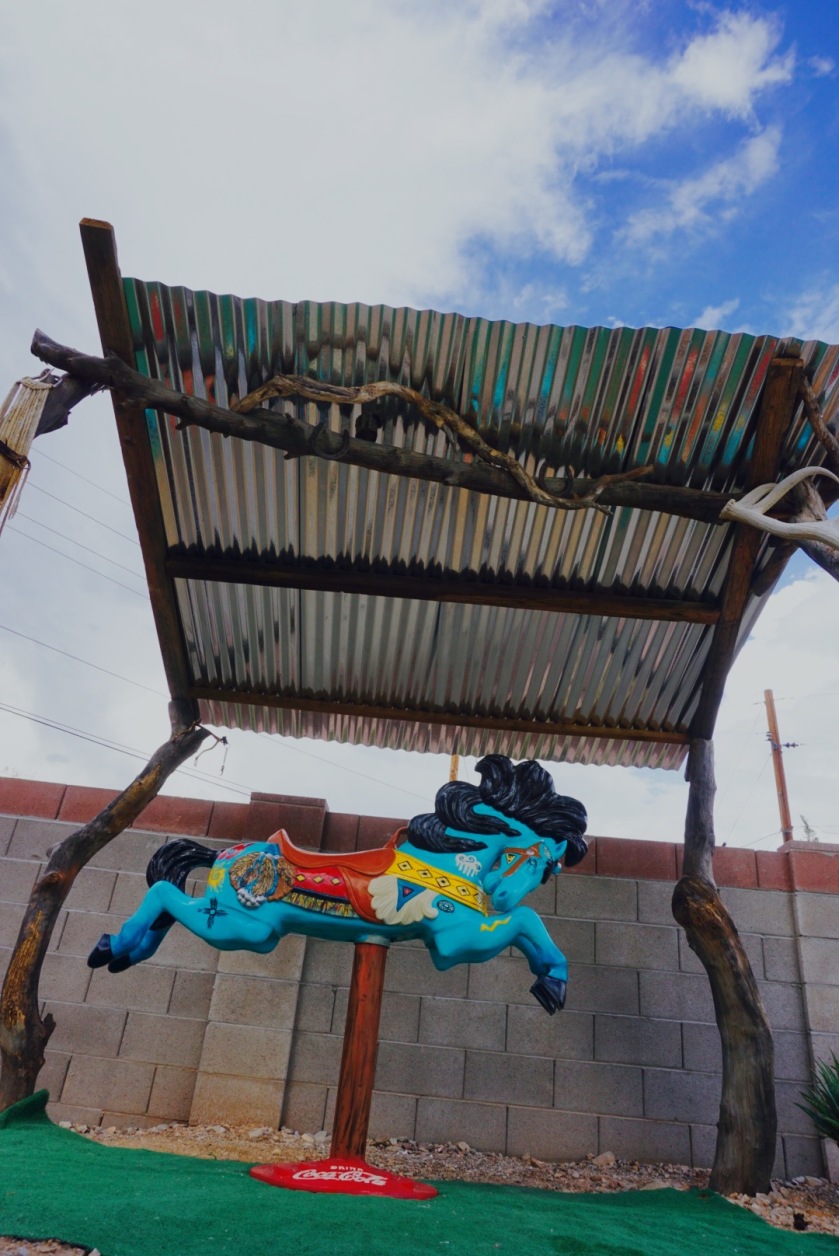 Ride to the sky Juanita.  You are free!

Juanita the teen years and at 90 years eating shrimp cocktail, having a Tecate beer, and wearing her hat sideways. 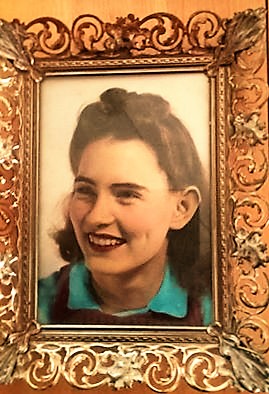 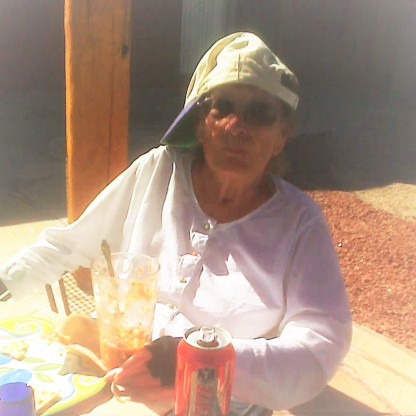 P.S. The Coca Cola base came with the horse.  I made it bright and new instead of antique looking because of something she said to me once as I was wheeling her about  at a restaurant in her wheelchair…

Me: “Nita, this is Tom Mix’s suit he wore in the movies. Do you want to see it?” 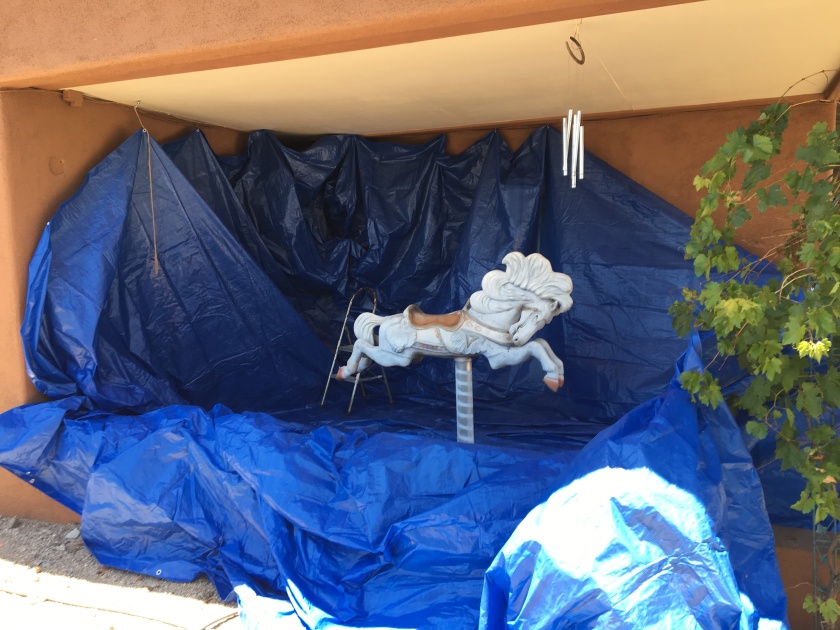 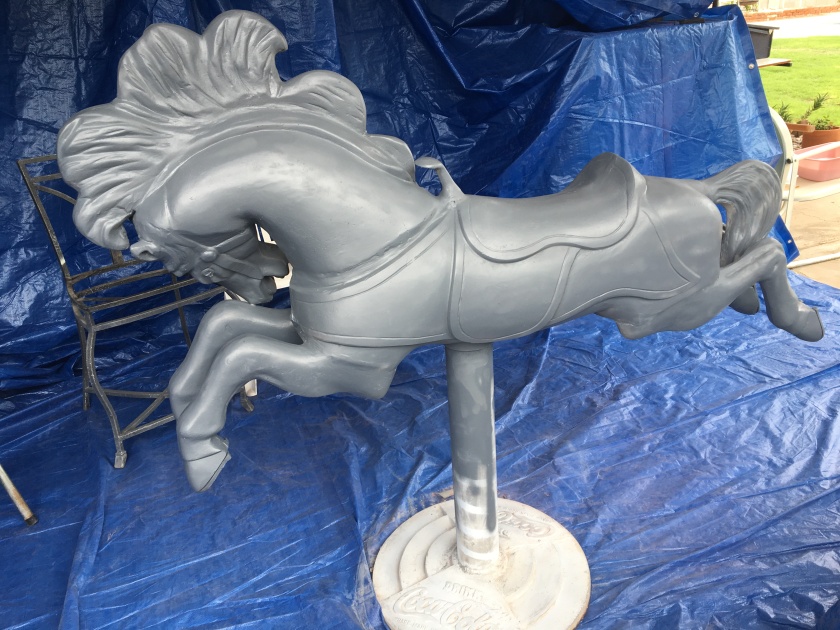 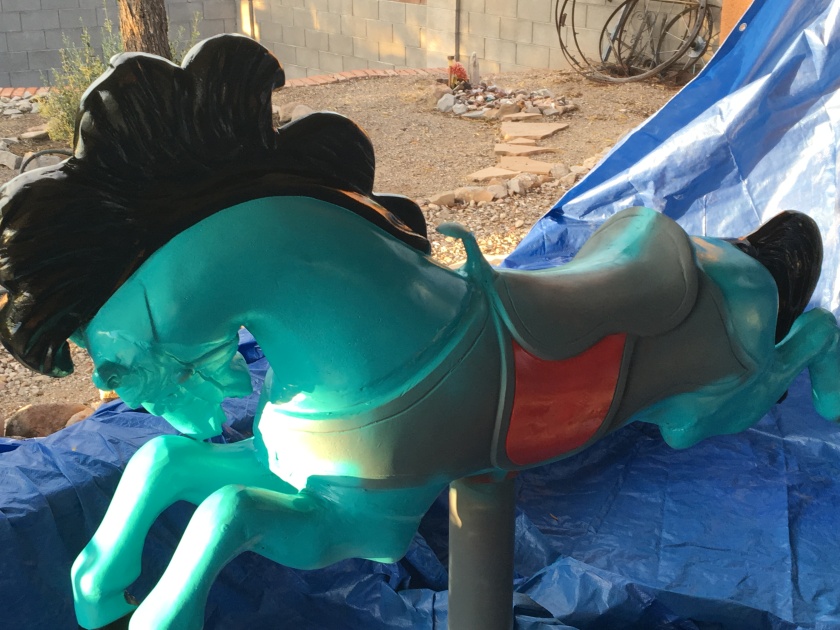 One thought on “Juanita Rides The Sky”